Don’t be limited to plain text. You can paste strings into Visual Studio as comments, string, StringBuilders, and more.

SmartPaster is a plug-in for Visual Studio .NET 2008 that allows text on the clipboard to be pasted in a format compatible with C# and Visual Basic code. SmartPaster can be downloaded from here.

To install it, un-zip above to:

Then restart Visual Studio 2008 and update settings for the Add-In in the Tools menu / Add-In Manager. After downloading and installing SmartPaster, you will see a new item on the right-click (context) menu, which is shown in Figure 2-4{.docLink}. 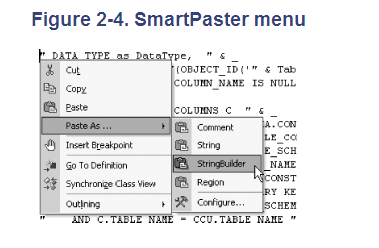 Many developers like to build a SQL statement using a tool such as Query Analyzer, for easy testing and debugging, or Microsoft Access, for quick, visual development. As simple as it is to build queries externally, putting them into code can often be a challenge, especially when the queries span multiple lines. SmartPaster eases the task of bringing external queries to code: simply copy your query to the clipboard and paste as a string or StringBuilder. For example, if you copied the following SQL to your clipboard:

then paste the code into Visual Studio using Paste As – String, you would see the following code:

You could also paste this code using Paste As – StringBuilder and specify a StringBuilder name of “sqlBuilder,” and this would result in the following code:

Like SQL statements, text displayed to the user is often developed externally, either by a copywriter, business analyst, or coder (such as myself), and requires the spellchecker within Microsoft Word. Usually, pasting such code would require going character by character, escaping quotes, and manually adding in line breaks. With SmartPaster, a quick right-click, paste-as, and your external copy is now internal without any of the normal hassle.

In an ideal world, all messages and dialogs would be stored in an external resource file and all SQL statements would be in views and stored procedures. But in a world of deadlines and disposable microapplications, doing it the right way is often trumped by “make sure it works.”

As we’ve seen, SmartPaster offers the option of pasting your text as a string or a StringBuilder. While the difference may seem cosmetic, there are actually appropriate times to use one over the other. The reasoning behind this is that string literals (i.e., strings explicitly declared in your code, as opposed to those input by the user) are immutable. This means that every operation on a string, such as a concatenation or replacement, involves creating an in-memory buffer, performing the operation, creating a new string, and finally passing the old one to garbage collection.

Just as with strings, any text on the clipboard may be pasted as a block of comments. I’ve found this very helpful in many cases. Having instant blocks of comments makes development much easier because of the following reasons:

and then pasted it into your document using Paste As – Comment, you would see the following comment added:

When pasting as a region, the clipboard text will simply appear between #region and #endregion tags with a region name of your choice. This feature is often helpful when organizing code within your application or pasting regions of code developed by someone else.

First, copy a piece of code like this one to your clipboard:

Then select Paste As – Region, and you will see the dialog shown in Figure 2-5.

From this dialog, you specify the name of the region that you want to use; after you click OK, this code will be pasted into your document:

SmartPaster offers a number of configuration options to make the add-in work best for you. The SmartPaster configuration dialog is shown in Figure 2-6 and can be accessed through Paste As – Configure. 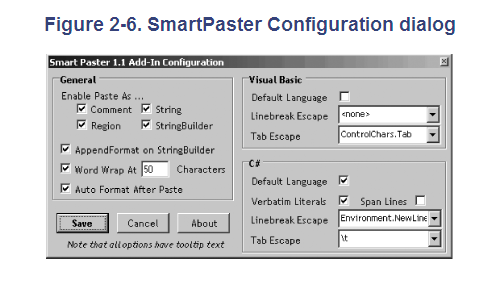 Some unique ways to tie your Shoelaces

Intellisense not working in Visual Studio – Tip of Week #1

Sometimes your intellisence stops working in Visual Studio. The problem mostly arises when you install some add-in or uninstall the add-in. I faced this problem When I un-installed re-shareper. Al...

If you are addicted to your setting in Visual Studio, then you can even import and export your settings. Navigate to Tools – Options – Environment – Import / Export Settings. you can export your e...

When you copy and paste text in any application, you are usually limited to copying and pasting one item at a time. If you want to copy two separate sentences, you have to copy the first one, pa...