During Diwali, Goddess Lakshmi is believed to visit homes that are well lit, so families decorate their homes. People wear their best clothes or buy new ones, children are given presents and new year greetings are exchanged through visits or Diwali cards. Thus, a Rangoli design is created on doorsteps to welcome everybody. Rangoli exudes a pattern in color that are specific for each region.

During Diwali, in the art of floor painting, the central rangoli design is the symbolic one denoting the deity or the theme. Motifs generally created are lotus, fish, birds, snakes etc. which reflects the unity of man and beast. Most of the rangoli designs are circular exuding a sense of endlessness of time. Celestial symbols such as the sun, moon and other zodiac signs are also common themes for rangoli. Layered with symbolism is the lotus denoting Goddess Lakshmi, the unfolding of life, the heart or the wheel.

During Diwali, two interfaced triangles are created that indicates the deity of learning, Sarswati. Encircling this is a 24-petal lotus flower border, the outer circle being decorated with Lakshmi’s footprints repeated in four corners. Sometimes the lotus petals are made in a triangular shape for variety. In north Bihar, Lakshmi’s feet are drawn at the door, the toes pointing inwards to indicate her entrance.

Again in Andhra Pradesh there is an eight-petal lotus (ashtadal kamal) and many geometric patterns forming the lotus. In Tamil Nadu the hridaya kamalam is an eight-pointed star meaning lotus of the heart. In Maharasthra too the lotus is a basic motif and designs like shankh kamal – shell lotus and thabak which means salver is in the shape of an eight-petal lotus with straight lines elaborated with curving lines to give it the appearance of a salver. In Gujarat alone there are said to be 1001 variations of the lotus which are drawn during Diwali, the festival when Goddess Lakshmi is worshiped. Other motifs are swastikas and conch shells.

All over the southern part of India the Diwali festival is marked by gaiety and prosperity. The rangolis drawn are peripheral. Most Rangolis are basically geometric patterns formed with dots and lines to make squares, circles, swastikas, lotus, trident, fish, conch shell footprints, creepers, trees bear testimony both to individual genius and community participation and many work for days together on single design.

The raw materials mainly used to make rangoli are edibles like rice flour, pulse and leaves. All over India, floor paintings are essentially white in color. White is a symbol of peace, purity and tranquility. The material used is rice flour or rice paste, because rice to all Indians is a sign of prosperity. Yet another symbol of prosperity is the color yellow. Turmeric yellow or ocher is also often used to fill in the white outlines. More often however, vermilion is used. Vermilion, is considered auspicious. Also used are pea green and rust brown. 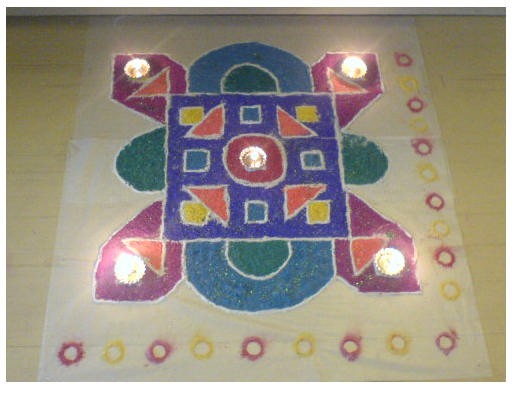 No Indian festival is complete without festivals. The mother of all festivals, Diwali, has them inplenty. They are an integral part of this Festival of Light. The festival is celebrated over five d...

The Tradition of Fireworks The Hindu festival of lights explodes into life with a riot of color and noise. A variety show and a fireworks display kicked off the Diwali celebrations. The festi...

What is true meaning of Diwali?

The time of Diwali is one of the most festive and beautiful times of the year. Diwali literally means a row of Lights. It is a time filled with light and love; a time when Indians all over the worl...